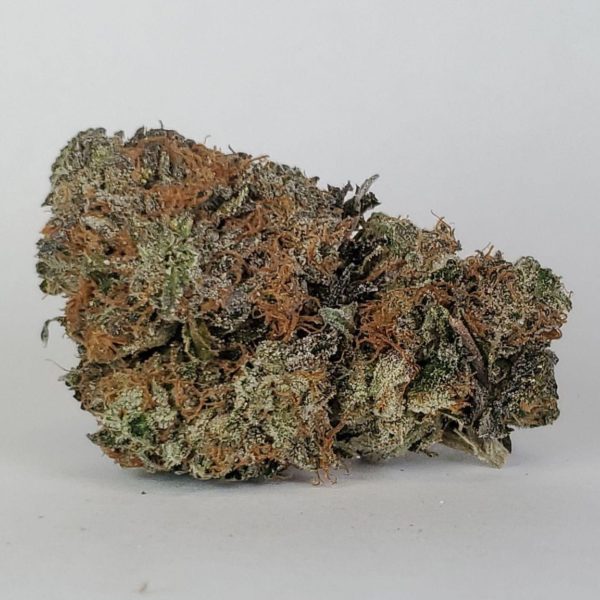 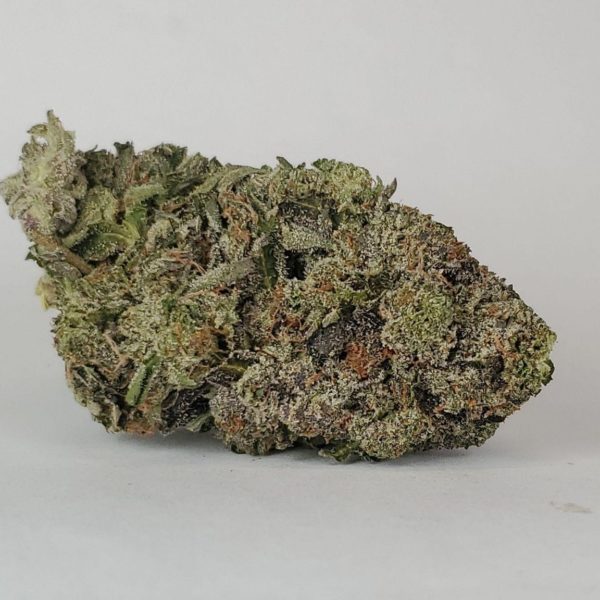 Gelato is a slightly indica dominant hybrid (55% indica/45% sativa) strain created through a cross of the infamous Sunset Sherbet X Thin Mint Girl Scout Cookies strains. This dank bud is infamous for its insanely delicious flavor and hugely powerful effects that are fueled by a THC level that hits its low point at 20% on average. Gelato has a flavor that’s said to be much like a sweet sherbet, with fruity blueberry and orange flavors. The aroma is just as sickly sweet, with a lavender citrus berry bouquet that has a woody effect as the nugs are broken apart and smoked. Although it has a tasty flavor, Gelato is definitely best loved for its effects. Even with its slight indica dominance, the high is head heavy in nature and won’t leave you sedated or couch-locked. It starts with a cerebral head rush that hits you in the forehead with an uplifted euphoria and a sense of slightly focused energy. As this head high blissfully builds, a creeping body buzz will slowly wash over you, leaving you completely relaxed and calm with a sense of peace and well being. These powerful and surprisingly well balanced effects make Gelato the perfect choice for patients suffering from muscle spasms, chronic pain, inflammation, chronic fatigue, and headaches or migraines. Gelato buds have large and lumpy super dense grape-shaped dark forest green nugs with rich purple and orange hairs and a super sticky coating of visible resin droplets.

The Gelato strain is a woody and smooth strain that incorporates flowery lavender and earthy notes which gradually transform into citrus and berries on exhale. It is a great strain to boost your mood and spirits, while also helping to instill a creative energy with intense focus. Gelato is also used for a long list of chronic conditions as well, making a great choice as a medicinal bud.

Named for the way in which it impacts the taste buds and senses with pure, dessert-like pleasure and sweetness, the Gelato marijuana strain has begun to overwhelm the world of cannabis – and in a pretty beautiful manner. Sometimes referred to as Larry Bird, Gelato was initially bred by the geniuses over at San Francisco’s Cookie Fam Genetics.

Many phenotypes of Gelato were released over time by these masters, but phenotype number 33 is the one most often associated with the strain – hence the name ‘Larry Bird’ (the basketball legend’s old number).

Beyond its naming and origins, Gelato marijuana has become world-renowned for its unique and impactful effects, which are well–balanced and won’t cause you to end up crashing in the end. Whatever your current “stoner status” may be, you need to try the Gelato weed strain; with its sweet citrus color and taste, it will very likely send you out of this world.

When Cookie Fam Genetics decided to cross Thin Mint Girl Scout Cookies with Sunset Sherbet, what they ended up with was somewhat unexpected. Through much trial and error, they finally produced a phenotype that they were happy with, and this strain has become known as “Gelato.”

A well-balanced hybrid that leans slightly more indica, this gorgeous and delectable weed type includes roughly 56% indica and 44% sativa genetics, yet seems to offer overall energizing and uplifting effects – not always the case with strains that contain more of the sedative indica genes. One of Gelato’s features that really sticks out, however, is its immense THC content – usually around 18% even in the lowest recorded test results.

The THC content of most specimens ranges between 20-26%, which is of course plenty of punch for those who desire herb that not only lasts a while, but also requires very little flower to actually be consumed before the strong effects are experienced.

Gelato presents the cannabis community with an original origin and intriguing genetic history, all tied together by the fact that this cannabis type is as delectable as your post-dinner treat — and promotes deep physical relaxation with flavors of citrus, berry, and sweet treats.

Following in the footsteps of its parent strains (Sunset Sherbet and Thin Mint GSC), Gelato is in essence named after the popular Italian dessert. It is a tantalizing hybrid cannabis strain with buds that tend to bloom in dark purple hues, and illuminated by fiery orange hairs that are gorgeous to glance upon.

There are no reviews yet.

Only logged in customers who have purchased this product may leave a review.